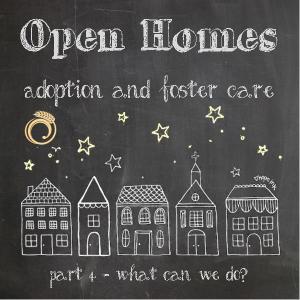 During the month of June, I’ve been exploring the issues of foster care and adoption in a series I call Open Homes: Foster Care and Adoption. If you haven’t read the other posts, here are the links:

–Week one: What is the Need? – Statistics about foster care in America and orphans around the world.

–Week two: Meet the Panel – An introduction to the panel of foster and adoptive parents who helped with the series and a few recurring themes of their experiences.

-Week four: What Can We Do?

There is a story going around the internet about a psychology professor. Discussing perseverance, the professor held up a glass of water. Everyone expected to hear the old “half full or half empty” debate. But the professor surprised them by asking instead, “How heavy is this glass of water?” Students offered their guesses. Eight ounces, ten ounces, etc. The professor then told them that the actual weight of the glass was not nearly as important as the duration of the hold. Anyone can pick up a glass of water for a few seconds; it feels virtually weightless. But after a few minutes, the glass begins to feel heavy. After a few hours it gets painful. Holding it up all day will leave you shaky and sore.

In Exodus 17, Moses experienced that. God inspired him to climb a hill overlooking a battlefield and hold up his staff. As long as he did, the Israelites were defeating the Amalekites in battle. When his hands fell, the Amalekites gained on the Israelites. This seems like an odd thing God asked of him, and my initial response is to wonder why. What did the Israelites gain from Moses standing there with his staff in the air? Maybe God was testing Moses’ obedience, or the exhaustion helped him empathize with the men who fought all day. Maybe seeing Moses on the hill with his staff in the air was inspiring for the soldiers. Maybe this story was put there for us.

Like the professor’s glass of water, Moses’ staff got heavy. His arms began to tremble. He faced a test of willpower. Did he want victory more than comfort? As long as he chose victory he had it, but comfort came with defeat. That’s deep stuff that is also true for us today. In so many areas of our lives we can choose comfort, but it comes with a terrible price. But that’s a lesson for another day. Today I want to consider what happened when Moses was at the end of his physical ability. Just when Moses thought he couldn’t hold up his arms any more, when his elbows and shoulders were giving out, Aaron and Hur arrived and held Moses’ arms. His arms were still raised, but the pain was gone and his will was strengthened; he knew it was possible to win because he didn’t have to be strong enough to do it alone.

Like Moses, foster and adoptive families face a daunting task. Even in the best of circumstances, the kids coming into their homes have faced loss and scarcity. And supporting these kids day and night is exhausting. But we can be Aaron and Hur for families around us.

1 – Pray – the transitions, the challenges, the joys, all of it needs to be covered in prayer. Prayer works, and the first thing it does is keep your heart soft and your eyes open to the needs around you. Pray for families you know who are adopting or who take in foster kids.

2 – Offer practical help – We all know that “let me know if I can help,” however sincere, doesn’t get much of a response. It’s hard to admit when you need help. Good friends don’t wait to be asked. Like Aaron and Hur they show up and pitch in. Panel member Gena said, “Reach out — help — even when it looks like a family “has it all together,” they are probably struggling in some ways.” Panel members suggested offering help around the house or babysitting.

3 – Treat the kids as kids – The stories of foster and adoptive kids really pull at your heartstrings. But they’re not the only ones facing challenges, and kids are very sensitive to inequality. Several panel members pointed out that elevating the foster or adopted child above the other kids in the family causes rifts between the kids and even encourages some negative behaviors. Treat foster and adopted kids just like anyone else their age; give them a chance to be normal.

4 – Sympathize (or empathize) – Parents of all stripes need to vent now and then. And kids of all stripes are both wonderful and challenging. Check in with your friends who foster or are in transition with an adoption. Remind them that you are praying for them, and offer (and re-offer) to pitch in. Even if they don’t take you up on it, they will know that you are thinking of them and that you are aware of the challenges they’re facing. If Moses had refused Aaron and Hur’s attempt to hold up his arms, I imagine they would have stayed nearby in solidarity and continued to offer their help until he accepted.

5 – Material support – Some of the families in the panel have had sudden placements. Foster kids often arrive with nothing but a paper grocery bag of dirty clothes. Taking in a kid who comes with nothing is expensive and daunting. A surprise Target gift card lifts burdens and spirits. Ask what the kids need. I’ve seen friends give luggage, school supplies, bedding, clothing (new and gently used), baby equipment, groceries/meals, toys/games, and even salon services to bless kids and their foster families. If a friend is adopting, throw a “big kid baby shower” or participate in adoption fundraisers. International adoption in particular is very expensive and it’s a huge blessing when friends donate or host fundraisers. There are tons of great fundraiser ideas online.

I hope you have learned some things this month about foster care and adoption. As always I encourage you to pray for the children without a forever family and the people who care for them. And if you have more ideas about being Aaron and Hur for foster and adoptive families, leave a comment!

Karah Hawkinson is a wife, mother, and professional historian from Minneapolis, Minnesota. Her passion is advocating on behalf of the world's hungry. She uses blogging, publications, and social media to help average Christians make informed decisions that have a positive, lasting impact on the world's hungry. Follow her blog at www.foodshelffriday.com