I am NOT a runner. I used to make jokes about it, like calling Proverbs 28:1 (“A fool runs when no one is chasing him”) my “life verse,” or saying that if you ever see me running you should run too, because it means that something bad is chasing me. But my husband is a runner (3 marathons and counting, #ProudWife), and now so is our son. So as I recovered from knee surgery and started making progress on my personal fitness journey, I had a nagging thought that I wanted to know if I could run.

The short answer is no. The long answer starts with “well, kind of…” Back in February, in a burst of carb- and coffee-fueled enthusiasm, I registered for my first 5k. Then I jumped on a treadmill and told it to do a 5k. I took 54 minutes. So I set a goal to finish my first race in 45 minutes, and started training. I started a couch to 5k program and got sick with a nasty and lingering cold. Then we did some traveling. Then the weather turned full-on winter again. But I had paid for this race and committed to doing it, and I was going to do it come hell or high snowbanks…

In a last-minute attempt to derail we had a little “adventure” finding parking on race day. My husband hadn’t brought his wallet along, and after he dropped us off near the starting line, we realized that he was going to need me to pay for parking. My son and I walked well over a mile to where my husband was, paid for and found a parking spot, and walked back to the start line with only moments to spare. It was tense. I was more than a little crabby about walking a 5k before the race even began. You see, I had worked for this. I had trained in spite of everything. I studied the race map. I carefully planned my outfit. I created a custom playlist for the race. I had visualized myself crossing the finish line in under 45 minutes as I tried to fall asleep each night.

My sweet, contrite husband, experienced runner and veteran of many many races turned to me and said, “Do you want me to stay with you?”

Stay with me? No way. My training prepared me to do this at my pace, not at his pace. And even though I’m sure he would have dialed back to my level, I would have been so self-conscious the entire time. I would have pushed myself too hard in the beginning and run out of steam before the end. I would have spent every step agonizing over what my husband thought of my form when I ran and my lack of stamina when I walked (I’m still speed walking over half of my “runs”). The only way this was going to work was if I could lose myself in my music and do this my way. So I thanked him for his thoughtful offer but suggested that it would be best if we each ran our own race.

That’s a familiar phrase – run your own race. I always thought it meant that we should do what is set before us and not get caught up in comparison and trying to do what God intended others to do. But running the 5k, I realized that trying to run someone else’s race doesn’t just mess with you, it messes with them as well!

Hebrews 12:1-2 says “Therefore, since we are surrounded by such a great cloud of witnesses, let us throw off everything that hinders and the sin that so easily entangles. And let us run with perseverance the race marked out for us, fixing our eyes on Jesus, the pioneer and perfecter of faith. For the joy set before him he endured the cross, scorning its shame, and sat down at the right hand of the throne of God.”

At about mile two of my 5k, I was passed by the tuba section of the University marching band, instruments and all. At about 2 and a half miles I passed a toddler in a Spiderman costume (passing a toddler is obviously not the story here, the story is that he stayed in front of me for most of the race!). I rounded the corner and headed into the final stretch, crossing the finish line in 45 minutes and 6 seconds. My husband was at the finish line, waiting with his camera ready.

I threw off the setbacks. I ran my own race. I finished strong. And though I still don’t consider myself a runner, I’ve registered for a few more opportunities to get that time under 45 minutes… 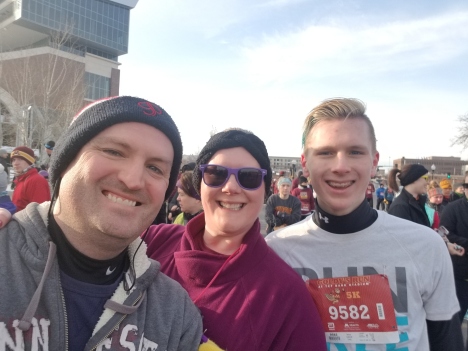 Karah Hawkinson is a wife, mother, and professional historian from Minneapolis, Minnesota. Her passion is advocating on behalf of the world's hungry. She uses blogging, publications, and social media to help average Christians make informed decisions that have a positive, lasting impact on the world's hungry. Follow her blog at www.foodshelffriday.com